skip to main | skip to sidebar

I've started a new blog for my Rome residency. Please follow me again and pass the URL on to interested friends.
http://susanslambdawolfblog.blogspot.it/
Susan
Posted by Susan Hawthorne at 12:16 AM 30 comments: 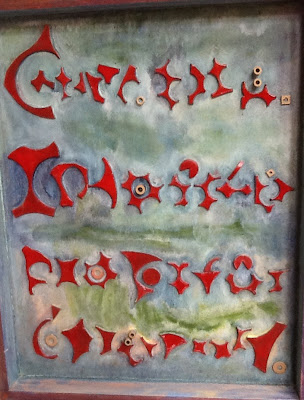 The above art work is by Suzanne Bellamy, Text Box (a pictographic poem), porcelain and oils on wood. Copyright 2011.
Photograph by Susan Hawthorne,© 2011.

The problematics of translation across species worlds: translating Ooss

As is clear from this translation there remain many gaps in our understanding of Os (or Ooss). While somewhat ossified, the language does have some transparency and a number of difficulties. The first thing to say is that the language while partially pictographic has a number of indicators for complex tenses and verb structures. Like other ancient languages it has three persons: singular, dual and plural. One strange element is that only the feminine gender is found (with a few archaic terms in neuter).

This short poetic fragment is suggestive of ritual time in which the behaviour of dogs as the keepers of time is unsurprisingly given prominence. The only non-canine actor (the woman) is setting off on a pilgrimage of some sort (crunch time?)

The difficulty with the word reflected is, I surmise, due to the lack of smell in a reflection, so the reflection’s unreality is a conceptual lacuna. If the subject of the woman sentence had been a dog, the wide semantic arc would have extended to the word ‘smells’ as well as ‘sees’ and ‘follows’.

It is clear from the original sentence structure that what is before the snout is of prime importance. Furthermore, the moon, the dogs (three so far) and the woman are in some kind of triangulated relationship with the fish, the sea and the reflected moon. Perhaps one indicates the mundane world, while the other has esoteric meanings. The question is which is which?


The above translation was made while visiting Suzanne Bellamy's Mongarlowe Studio in December 2011.

Japanese
The following translations into Japanese were made by Michelle Kasparian during the lecture I gave at the University of Wollongong today (24 April 2012). Michelle writes:


"Here's the three different ways you can translate the first line of 'Dog Three Bones Has' into Japanese.


"I've put each line into each level of reading in Japanese (Kanji, Hiragana and Romaji). Romaji is the Japanese words written in English letters and makes it easier to pronounce/read aloud if the reader doesn't know Japanese."

I’m a slut
but but
but I’m not I’m not
I’m a slot
I’m a slut
but but
what what could it mean
am I a slut?
but but
he said you’re a slut
he said look at your butt
you’re a slut
I said
but but
she said she’s a slut
no buts about it
just a slut
all smut
they all said she’s a slut
no doubt about it
but but I said
I said but
I’m no slut
I’m no slit for your bit
I’m not here for you
so fuck off and stop doin me in
he said but but
no slut here
no fear
he said but but
she said but but
they said but but
I’m not the butt of your names
your words are not my words
no fuckin way
so shut up
I’m no slut
I’m no slut walker
I’m a walker but bein a walker
don’t make me no slut
so butt out
get outta my mind
I’ll think what I want
I’ll do what I want
I’ll walk at 3 am if I want
I’ll wear big boots and kick butt
I’ll cut my hair short
I’ll leave it long
but I won’t do pussy on the street
because I’m not here for you
you pussy stalker
cos I’m no slut
you say but but
you look like a slut
you must be a slut
if you’re out a 3 am
if you don’t look girlie
you must be a fuckin feminist
they’re all sluts
that’s what they are
and I say
you got it boy
you got it girl
I’m a feminist
now fuck off
I’m no slut
d’you hear
try again
I’m no slut
they all said but but 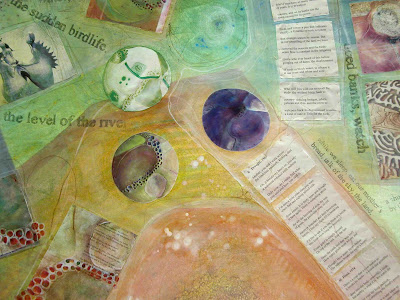 In 2008 Suzanne Bellamy and I were commissioned by Lella Cariddi to bring together art and poetry for a touring exhibition on the subject of drought. Drought is often followed by flood and the poem here was written in memory of the flood which I experienced on my parents' farm along the Murrumbidgee River at Wagga in September 1974. This year Wagga has seen floods yet again, as has Brisbane and many other towns across Australia - as well as in the Philippines and Brazil.

The image is from the canvas Suzanne produced in response to my poems while I in turn wrote new poems inspired by her art. We have been friends for many years and it was great to be able to work together on this project.

For all the people reeling from the flood, wherever you are


Flood, 1974
There’s a roar that a river makes as
it breaks its banks– a sound that grumbles

deep into the body, unearthly, I think,
but earthly is what it is. We watch the

sun rise over the front paddock,
our bodies absorbing the flood’s power,

a shuddering that is later taken up
by the muscles in a great release.

It is a day of contrasts: we children
sent to round up cattle, our unkitchened

mother bakes a loaf of bread, our father
is trapped in a tree for thirteen long hours

while we sleep, eat our mother’s
bread, talk of the sky, the land,

the height of the river. Late afternoon
he is delivered in a boat, rescued by men

bearing sandwiches. None of us knew
of his ordeal until it was over. In the days

that follow we gauge the level of the river,
walk again the reduced banks, watch

the swirl of snag-driven water,
thrilling to the sudden birdlife.

The poem is from the chapbook, Unsettling the Land by Suzanne Bellamy and Susan Hawthorne, Spinifex Press, 2008
Posted by Susan Hawthorne at 12:37 AM 5 comments:

It's strange that you can spend a whole year writing poetry daily - and then a year in which you write almost nothing. Here is one of the few poems I wrote in 2010. The image is artwork from Mexico. It reminds me of Frida Kahlo.

in a three-cornered hat
death is stalking this interview

death is an exile in the world of the living
Posted by Susan Hawthorne at 10:18 PM No comments: 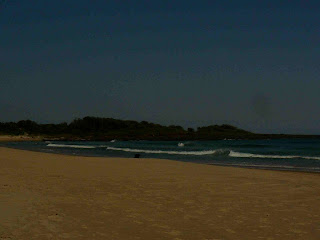 I wrote this poem last year when I was caught in an ocean rip. I had never understood how a person could drown in a rip. We'd been warned before going in and before I knew it I was way out and thought I'd better go back. It was the first day of a two-week Sanskrit intensive and I had just met the woman standing next to me. She got back in first and turned to watch while I struggled and somehow made it. I felt the line of her gaze pulling me in. My muscles went to water. My breath was sucked out of me. I stumbled as I reached the edge, almost fell. That afternoon, I had also felt overwhelmed by my inability to understand any of the language spoken around me. I was also drowning in words.


rip dp 60
for Lucinda
She was drowning,
not waving in the
rip of language. Help,
she called breathless,
the cold of its logic
wrapping itself about
her limbs. Swim across
the rip, through the
decline, let the wave
and its rhythm carry
you in. When you are
ready you will stand
upon your own two
feet. Don’t stumble
into the deeps of other
tenses, keep a cool
head. Her feet are
falling out from under
her. Linguistic dizziness
has her in its thrall.
One step, two step.
One breath, next breath.
She has found the
shoreline, the continental
shelf of language, her
feet are solid on the sand.
Posted by Susan Hawthorne at 4:38 PM 20 comments:

Susan Hawthorne
Poet, aerialist, publisher and academic. Author eight books of poetry, a verse novel, a novel, and three non-fiction. Earth's Breath (2009) was shortlisted for 2010 Judith Wright Poetry Award. In 2011 I published the collection, Cow which started on SusansCowBlog in 2009. Cow was Shortlisted for the 2012 Kenneth Slessor Award in the NSW Premier's Awards and was a Finalist in the 2012 Audre Lorde Lesbian Poetry Award in the USA. Also published in 2011 was my chapbook, Valence: Considering War through Poetry and Theory. In 2013, I published a verse novella, Limen. Other books include Wild Politics: Feminism, globalisation and bio/diversity (2002) and the anthology September 11, 2001: Feminist Perspectives (2002). My two most recent books are Lupa and Lamb (poetry 2014) and Bibliodiversity: A Manifesto for Independent Publishing which has been translated into Arabic and French with several other languages to follow. You can find my other books at Spinifex Press in both print and eBook formats. Go to: http://www.spinifexpress.com.au 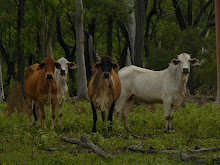 Cows in the Australian bush